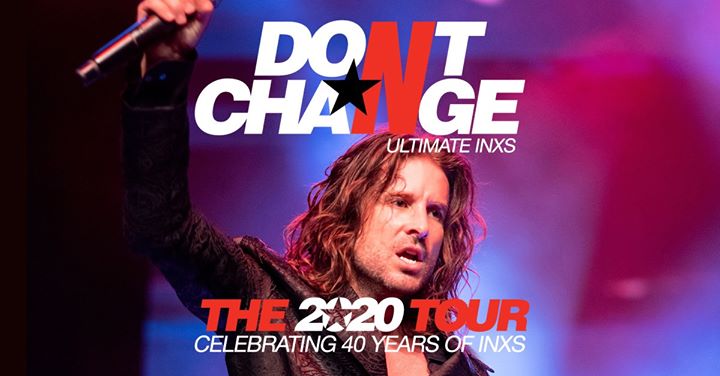 ProShows Entertainment presents DON’T CHANGE – ULTIMATE INXS on their 2020 Tour, celebrating 40 years since INXS burst onto the charts in 1980 with their self-titled debut album “INXS”

Considered to be the most authentic INXS touring tribute productions, fans have been partying to XS with Don’t Change at shows across the country.

Featuring a line-up of 6 exceptional musicians led by the charismatic front man Blair Dwyer, Don’t Change – Ultimate INXS perform INXS’s 1982 Long Jetty Hotel set, plus all the biggest INXS hits across three decades with tracks such as Never Tear Us Apart, Original Sin, Don’t Change, Listen Like Thieves, Burn for You, Need You Tonight, Pretty Vegas, I Send a Message, Suicide Blonde, Devil Inside, and many, many more!

Events listed on this site are subject to change by the artist and/or venue. Due to public health concerns presented by COVID-19 many event organisers, venues and promoters are making changes to their schedules. With a large number of postponements and cancellations at this time we encourage you to check directly with relevant contacts before making plans.

We specialise in content marketing and impression-based display advertising. We create original, entertaining and engaging content that focuses on telling not selling, and offer results-driven display advertising.  To discuss what Central Coast Live can do for you, email advertise@cclive.com.au or call 0432 023 523.

Back to Top
Close