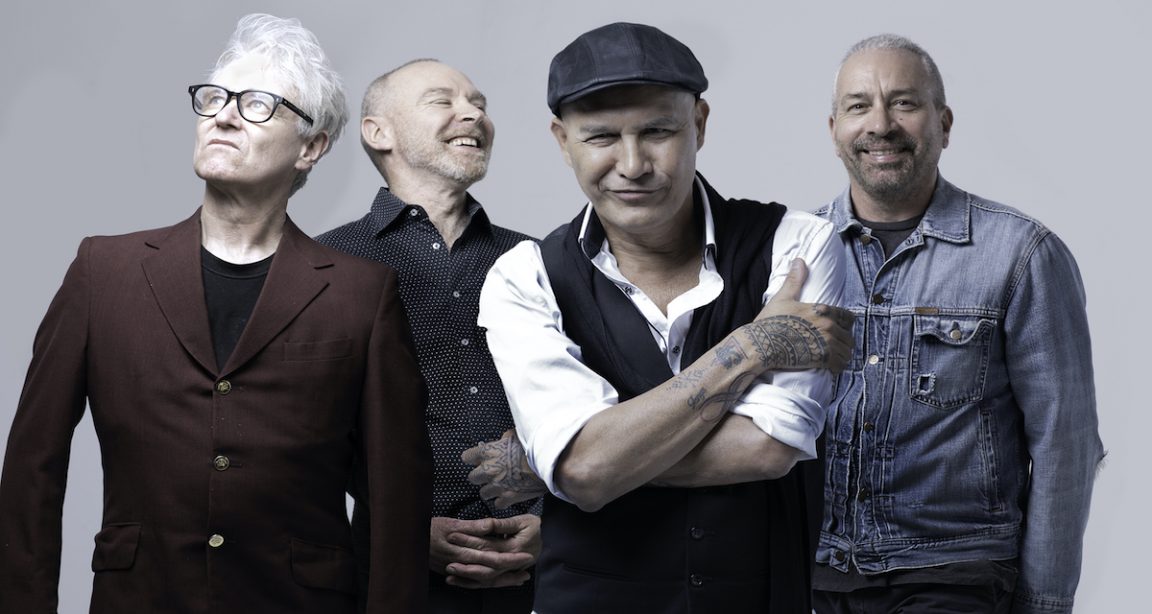 For Boom Crash Opera frontman Dale Ryder, one of the standout reasons that the band’s litany of hits continues to resonate so strongly is a distinct lack of cringe.

Speaking to Newcastle Live, Dale said he and the band had avoided the pitfalls of dating their output by relying on genre fads and external expectations throughout their storied career.

“I think it’s fair to say that a lot of our songs have stood the test of time,” Dale said.

“For me, I feel glad that I don’t have to cringe about singing crazy lyrics that I wrote a long time ago. I mean, it’s so much easier singing Onion Skin at 66 than it would be singing W.A.P at 66 – can you imagine the cringe Cardi B will have to deal with singing that song in her 60s?”

And Newcastle Boom Crash Opera fans are in for a very un-cringeworthy treat when the Dancing In The Storm hitmakers hit The Sunken Monkey Hotel this month as part of their Kick It Out Live tour.

Already three shows into the run, Dale said he and the band – Peter ‘Maz’ Maslen (drums/vocals), Peter Farnan (guitar/vocals) and John Favaro (bass) – were having an absolute blast.

“We play an hour and a half on stage supporting ourselves starting off acoustically, doing some old tracks that we’ve never done before from all the albums. It’s been a lot of fun.”

Boom Crash Opera is definitely a band that is equally at home belting out a thirty-minute set of hits on summer festival stages as they are in the more intimate vibe of the pub/club milieu.

But does Dale have a particular favourite or do they each hold their individual charms and drawbacks?

“I guess club and pub shows are a lot more theatrical and there is more space for you to do a little bit more exploring, but it’s also great fun getting out on those big stages and blasting 30 minutes of all your hits.

“Although it does take a special kind of lunatic to want to do an hour and a half on stage, man. A lot of those Crashies songs are quite high, and I’m getting quite old.”

For a frontman as effortlessly on point as Dale, the pre-gig preparation is surprisingly quick.

“My preparation is about four beers, then I have a little burp and I’m good to go,” he laughed.

“But seriously the Crashies have always had the old acoustic guitar backstage and we all like to have a bit of a sing along which is great preparation.

“It really is all about fun for us these days. There’s no pressure about world domination – it’s just about giving something back to the punters that have supported us all these years and we’re seeing a lot of new people, young people coming in which is just great.”

Dale, who left Boom Crash Opera back in 2016 [replaced by Andrew De Silva] before returning in 2019, said that he jumped at the chance to reunite with his bandmates.

“I never thought I’d miss it that much. When I got the opportunity to come back I was instantly in.

“It’s a special band and I think that was something I realised the very first time we made a noise together. After that first rehearsal, I had a pretty big inkling that there was something special going on here.”

And with such huge hits as Onion Skin ( which reached number 8 on the US Billboard charts), Gimme, Great Wall, and Dancing In The Storm across five studio albums, it’s pretty much a free-kick to sat those early assumptions may just very well be right.

While it has been a considerable time between drinks, with their last studio album of new material Gizmo Mantra dropping in 1996, Dale said recording was not high on the band’s agenda. But you never know!

“Never say never, but I honestly think if you go and see a “heritage” band do you want to hear them say this is our new direction or do you want them to smash out the hits?,” he asked.

“But if a great song comes, and Peter [Farnan] is always writing, I’m happy to record, put it out and see what happens.

“To be honest it’s a real pleasure to be playing songs like Onion Skin and Dancing In The Storm 35 years on. I’m flabbergasted all the time when we’re doing a festival and there’s, like, 7000 people clapping and singing along. It is a great pleasure to be able to do that.”

Catch Boom Crash Opera at The Sunken Monkey Hotel on Sunday, 13 June 2021. Get your tickets here.